Sign up for email updates from the Green Schools Program

About the Green Schools Program

The Macomb County Board of Commissioners recently honored the 122 schools which achieved Official Michigan Green School status for the 2018-19 Program Cycle.

Tori Trumper from Seneca Middle School, is the creator of the winning logo this year!

Each year the "best of each category" is recognized for the designations of Green, Emerald and Evergreen.  Top Schools for 2018-19 are as follows:

New this year was the "Green Advocate Award" which is awarded to an individual who goes above the call of duty and provides exceptional leadership in environmental education and green activities. This year's was Ariella Sinistaj, a student at Utica Alternative Learning Center.

New this year was the "Green Advocate Award" which is awarded to an individual who goes above the call of duty and provides exceptional leadership in environmental education and green activities. This year's inaugural winner is Kevin Bai, Chippewa Valley High School.

We appreciate the 128 schools that have achieved Official Michigan Green Schools status for the 2015-16 academic year!  Schools were honored at a celebration event held on April 15, 2016.  Of the 128 participants, 44 earned Green status; 33 earned Emerald status; and 51 achieved Evergreen status, the highest possible designation.

The awards given out this year are as follows:

Congrats to all of the schools that participated in the Michigan Green Schools Program this past school year.  This year 22 schools achieved "Green" status; 43 earned "Emerald" status; and 64 earned "Evergreen" status.

This year the Top School Awards for each designation were:

While there have not been many changes to the coming year's application, creativity, innovation, and originality are encouraged for the 2014-15 applications.

Schools which have incorporated sustainabilitly into everyday practices and maintained a commitment to educate and promote environmental education and stewardship to Macomb County students for five consecutive years were honored.

Twenty-four schools in the Macomb County Green Schools Program submitted student-created designs to be considered for use as a logo in Macomb County Green Schools program materials. Students representing all levels between kindergarten and 12th grade sent in submissions; which made a final decision of just one very difficult.  The finalist was submitted by a student from Warren Consolidated Schools’ Career Prep Center.

Description of the entry:

The evergreen tree is symbolic of the land and vegetation we need to protect. The birds breaking free from the tree are symbolic of two things – protecting our wildlife and protecting the air we breathe. The steams on either side of the tree are symbolic of the need to protect our most precious natural resource – our water. Water is the essential ingredient to sustain all forms of life. The logo is designed to resemble a poker chip because our environment is nothing we should gamble on.

There are now five categories for designated points and activities.  At least 2 activities from each of the first four categories must be earned to achieve Green School status.   Additional options are given in the fifth category, but these miscellaneous items must be approved by a county coordinator.

Schools (121) earning Official Michigan Green Schools status for the 2011-12 year were honored at a Celebration held at the MISD on Monday, April 16, 2012. Prizes were awarded for best application in category for Green, Emerald and Evergreen as well as Macomb's Overall Top School.  Winners of the Project RE-Directory Challenge were announced during the event as well.

The 2010-11 academic year marked the third program cycle for the Macomb County Green Schools Program. A total of 101 schools from across the county achieved Official Michigan Green School status. 105 applications were submitted by the March 1, 2011 deadline which provided details and descriptions of activities that schools participated in to achieve the criteria set forth by PA 146 as well as the enhancements added by the Southeast Michigan Green Schools Initiative.  A special review panel carefully reviewed each application submission and ultimately approved 101 schools for Official Green School status. Of the 101, 32 schools completed an additional five activities to earn "Emerald" status and 36 earned ten additional points for "Evergreen" status.

Each schools' special achievement was honored at an Awards Ceremony held at the Macomb Intermediate School District (MISD) building on April 11, 2011. Schools new to the program or returning after having been off for a year earned a flag - returning schools each earned a special patch for the designation earned this year as well as in previous years.  Each school also received a certificate signed by Macomb County Board Chair Kathy D. Vosburg and Governor Rick Snyder.

In addition, the three Sterling Heights schools which participated in AT&T's Project ReDirectory Challenge learned the results of their efforts to collect outdated phone books at the Awards Ceremony:

What an amazing effort by students, staff and the community!!

The 2009-10 academic year was the second for the Macomb County Green Schools Program. A total of 71 schools from across the county achieved Official Michigan Green School status. Program enhancements were made to allow schools to participate in more activities and earn designations of "Green," "Emerald," or "Evergreen." More than 80 applications were submitted by the March 1, 2010 deadline which provided details about activities relative to the criteria set forth in the law as well as the additional enhancements added this year. After a thorough evaluation by a review panel, the 71 schools which met or exceeded requirements were approved for Official Green School status.

Each schools' special achievement was honored at an Earth Day Ceremony held at the Macomb Intermediate School District (MISD) building on April 22, 2010. The new flag (below) was given to schools; in addition each school received a certificate signed by Governor Jennifer M. Granholm, Lt. Governor John D. Cherry and Macomb County Board Chair Paul Gieleghem.

Macomb County first launched in 2008-09 academic school year with participation from 45 schools across the county. Staff and students from various elementary, middle and high schools took part in activities and began initiatives which met the 10 points required for Official Michigan Green School status. Applications with details were submitted and reviewed for compliance. Schools were awarded the below flag and a certificate at an Earth Day awards celebration.

In 2009, Macomb, Oakland and Wayne counties formed the Southeast Michigan Green Schools Initiative and added further enhancements to the Michigan Green Schools Program so that schools that have already achieved Official Green School status can take their efforts to a higher level. Schools new to the program may also choose to complete extra points to achieve one of the new designations. 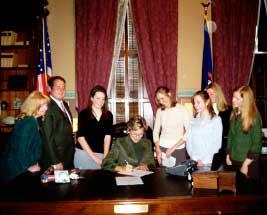